The most important cities by 2035

Cities are the engines of the modern economy. Over half of the world now lives in urban areas, and urbanization continues to shape the trajectory of global growth in unprecedented ways.

However, the most important cities of today may be quite different than those leading the charge in the future. This week’s chart looks forward to 2035, using a report by Oxford Economics to forecast the top 10 cities by measures of economic size, population, and GDP growth rate.

Each map is categorized by one of these metrics—and depending on which one you look at, the leaders vary greatly.

The top 10 cities by gross domestic product (GDP) in 2035 will be fairly widespread. Three cities are expected to be in the U.S.—New York, Los Angeles, and Chicago. The Big Apple’s forecasted $2.5 trillion GDP likely stems from its strong banking and finance sectors. 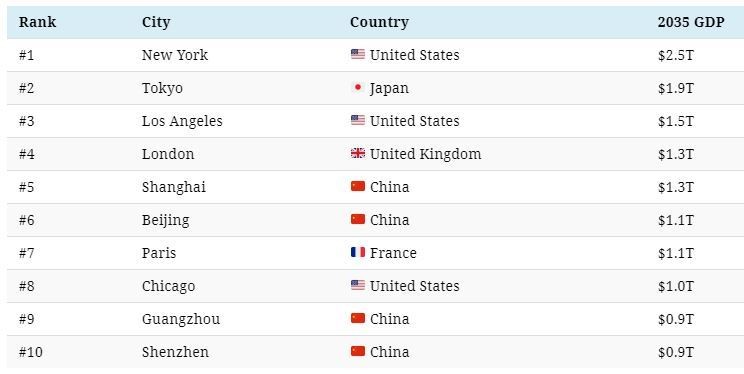 Four cities will be found in China, while London, Paris, and Tokyo are set to round out the last three. Interestingly, Tokyo is the #1 city today, with an estimated $1.6 trillion GDP in 2019.

Altogether, these top 10 cities will contribute an impressive $13.5 trillion in GDP by 2035. Clusters of such metropolitan areas are typically considered megaregions—which account for a large share of global economic activity.

Next, it’s clear that top cities by population will follow a distinct global distribution. By 2035, the most highly-populated cities will shift towards the East, with seven cities located in Asia. 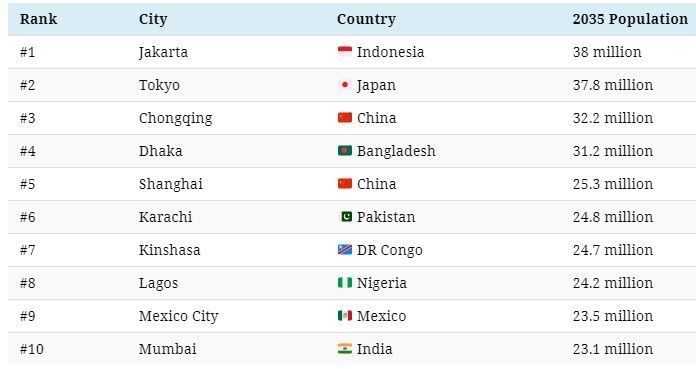 While Jakarta’s 38 million-strong population is expected to emerge in first place, the city may not retain its status as Indonesia’s capital for much longer. Rising sea levels and poor water infrastructure management mean that Jakarta is rapidly sinking—and the government now plans to pivot the capital to Borneo island.

On the African continent, Kinshasa and Lagos are already among the world’s largest megacities (home to over 10 million people), and will hold top spots by the turn of the century.

Population and demographics can be major assets to a country’s growth. For example, India’s burgeoning working-age demographics will present a unique advantage—and the country is projected to contain several of the fastest-growing cities in the coming years.

When comparing cities based on their pace of economic growth, there are some clear standouts. The average annual GDP growth across cities is 2.6%, but the top 10 surpass this by a fair amount.

The kicker? All of 2035’s major players will be found in Asia: four of the fastest-growing cities will be in mainland China, another four in India, and the last two in Southeast Asia. 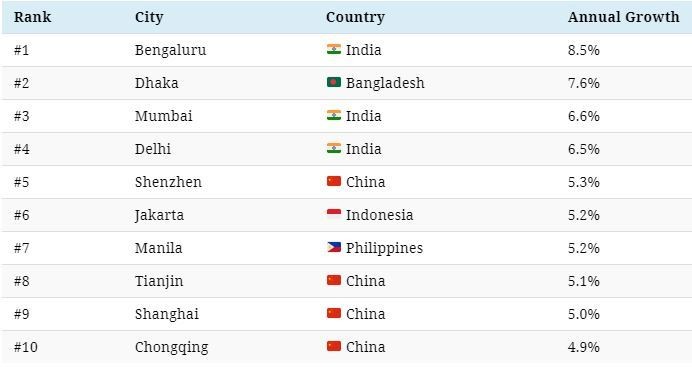 At #1 by 2035 is Bangalore with an expected 8.5% annual growth forecast—its high-quality talent pool makes the city a breeding ground for tech startups. Jakarta makes another appearance, with its projected 5.2% growth at double the city average.

Shanghai finds its way onto all three lists. The commercial capital hosts the world’s busiest port, and one of China’s two major stock exchanges. These sectors could help boost Shanghai’s annual GDP growth to 5% in 2035.

Looking to the future

Of course, any number of variables could impact these 2035 projections, from financial recessions and political uncertainty to rapid urbanization and technological advances.

But one thing’s certain—in the coming decades, cities are where many of these factors will converge and play out.

This article is published in collaboration with Visual Capitalist

How Chinese Financing is Fueling Megaprojects Around the World

The Happiest Countries In The World in 2019

Uncomplicated and easy to assimilate structure